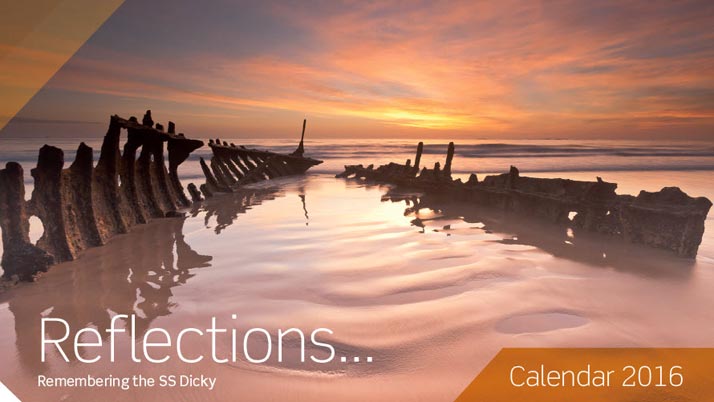 Reflections – Remembering the SS Dicky 2016 cultural heritage calendar was launched by Mayor Mark Jamieson today in commemoration of the historic SS Dicky that came to ground on Dicky Beach at Caloundra in 1893 and as a wreck, became a local and visitor attraction.

Mayor Jamieson said the calendar was a tribute to the importance of heritage to our community.

“As a community, it is the sharing of our history that shapes our identity as a people and what it means to be a resident of the Sunshine Coast. We know the SS Dicky will always hold a special place in everyone’s hearts and it is only fitting the 2016 cultural heritage calendar is dedicated to the SS Dicky.”

Division 2 Councillor Tim Dwyer said there was no doubt the SS Dicky had been an integral part of the Sunshine Coast landscape since it shipwrecked 122 years ago on the beach that now bears it name.

“In fact, Dicky Beach is the only recreational beach in the world to be named after a shipwreck,” Cr Dwyer said.

“As a popular heritage icon, the SS Dicky has been photographed by thousands of people over the years as its appearance has slowly changed due to the variable weather conditions it has endured.”