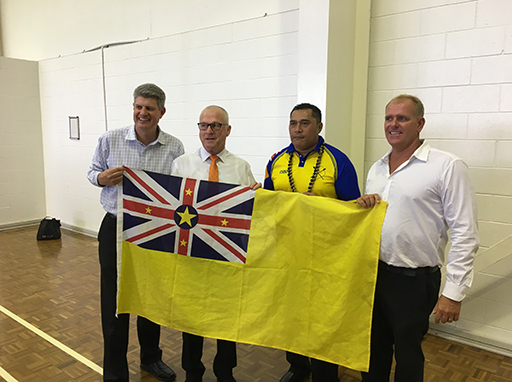 Niue might be one the world’s smallest independent nations, but it has big ambitions for the Gold Coast 2018 Commonwealth Games with the assistance of Sunshine Coast Council and the Queensland Government.
Minister for Transport and the Commonwealth Games, Stirling Hinchliffe and Mayor, Mark Jamieson today announced a partnership to help team Niue prepare for the GC2018 Games’ weightlifting, lawn bowls, netball and athletics competitions.
“This special partnership with council will see Niue’s athletes and officials train and stay on the Sunshine Coast to prepare for the island nation’s 2018 Commonwealth Games campaign,” Minister Hinchliffe said.
Mayor Jamieson said the Sunshine Coast would host a team up to 50 athletes and officials from Niue, located between Samoa, Tonga and the Cook Islands.
“This is a fantastic way our community can assist a team of athletes from a small country who’ve never had the luxury of a training base to prepare for a Commonwealth Games,” the Mayor said.