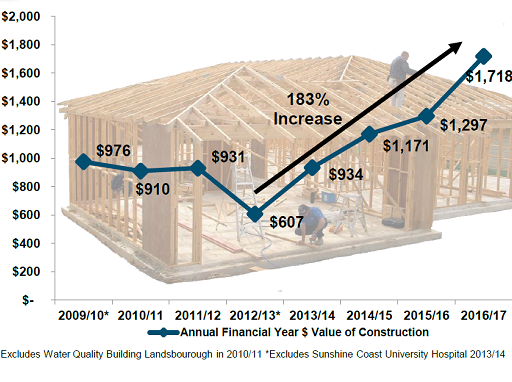 Sunshine Coast building approvals are at their highest level in eight years, with Sunshine Coast Council issuing $1.72 billion in approvals for the 2016/17 financial year.

Council has published its Development Indicators Financial Year Highlights Report, which presents a selection of statistics on development activity throughout the past 12 months.

“For the third consecutive financial year, council has recorded building approvals with a value in excess of $1 billion,” Mayor Jamieson said.

“Game-changing projects such as the new Maroochydore CBD, Caloundra South (Aura), Palmview (Harmony), the opening of the new Sunshine Coast University Hospital and the expansion of the Sunshine Coast Airport have been setting the scene for increased building approvals.

“These projects attract a range of investments, providing greater stability for our local economy and assisting to smooth out the traditional boom bust cycle.

“The majority of the $1.72 billion in building approvals continued to be of a residential nature, however last financial year there was increased growth in the proportion of multiple dwelling units with a total of $341 million approved, an increase of 68% from 2015/16.

“The majority of these approvals have been recorded within the enterprise corridor between Caloundra and Maroochydore.

“Another positive sign for the local economy has been an increase in the value of building approvals relating to uses such as offices, shops and restaurants, with companies such as Youi committing to a new global headquarters here on the Sunshine Coast.