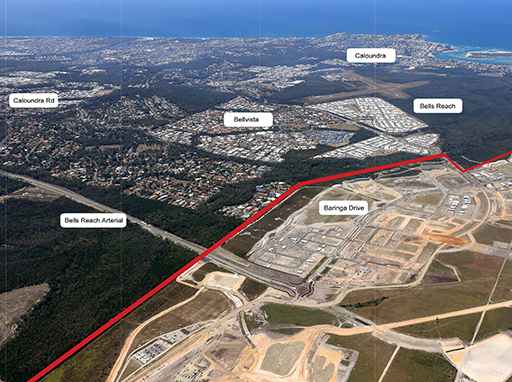 A ceremony to mark the completion of the first stage of the much-anticipated Bells Creek Arterial Road has been held at the southern end of the Sunshine Coast.
Mayor Mark Jamieson and Division One Cr Rick Baberowski joined Minister for Main Roads and Road Safety Mark Bailey and representatives from developer Stockland at the official opening of the 2.8km stretch which gives direct access to Aura, Australia’s largest master-planned city.
Mayor Jamieson said the road construction had provided the first of 18,500 direct and indirect local jobs for the Sunshine Coast over the first 10 years of the Aura project.
“I know our residents and visitors have been watching its progress with great interest and will be delighted to know this road will soon be open for them to use,” he said.
“More than 200 people have been employed in the construction of this road alone which contributes to our high employment rates – better than the Queensland average.
“The arterial road is part of a $1.3 billion Infrastructure Agreement between council, the Queensland Government and Stockland – an agreement that comes at no cost to the ratepayer.
“Aura, or Caloundra South, is a major site for accommodating the significant growth occurring on the Sunshine Coast and it’s vital that we get its transport needs right.