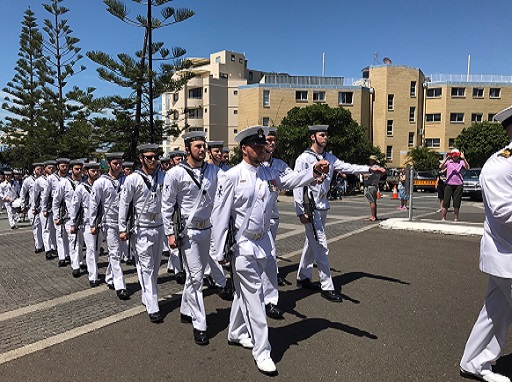 The words ‘halt, who goes there’ echoed through Kings Beach on Saturday, October 28 as the Royal Australian Navy exercised their Freedom of Entry rights in Caloundra and renewed their Friendship Agreement with Sunshine Coast Council.
The traditional celebration occurs only once every four years and provided unique entertainment for the community.
Mayor Mark Jamieson said the 816 Squadron’s Freedom of Entry ceremonial march and challenge, in full military regalia, recognised there is a mutual dependency between the military and the community.
“In 1996, the 816 Squadron participated in training exercises in Moreton Bay, during which time retired members of the Fleet Air Arm living on the Coast initiated introductions between the squadron and the former Caloundra City Council,” Mayor Jamieson said.
“As a result, Caloundra City Council first bestowed Freedom of Entry rights in 1996.
“This year marked the 21st anniversary of 816 Squadron’s acceptance of the right to exercise Freedom of Entry to the city of Caloundra.