Home / All Posts / Community / Key to the city awarded to Coast’s netball...

Key to the city awarded to Coast’s netball champions 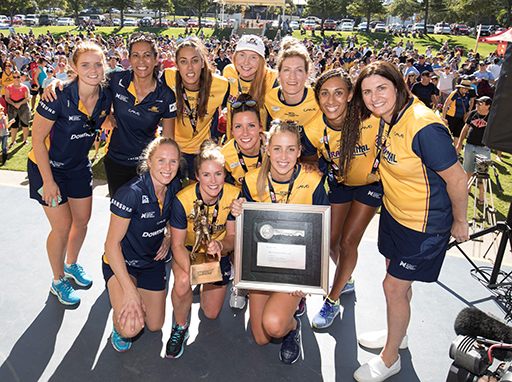 Key to the city awarded to Coast’s netball champions

The history-making Sunshine Coast Lightning have  been presented with a key to the city after becoming the inaugural Suncorp Super Netball champions.

In front of hundreds of jubilant fans in a welcome home celebration at the Kings Beach Amphitheatre at Caloundra on Sunday, Sunshine Coast Mayor Mark Jamieson awarded the key to Lightning captain Geva Mentor to formally recognise the team’s achievement.

The Lightning, who came together less than a year ago as the Coast’s first team in an elite national sporting competition, defeated the Giants 65-48 in the grand final at the Brisbane Entertainment Centre on Saturday night.

The game was watched live by a crowd of 8990 and a national TV viewing audience calculated at 447,000 viewers.

“The pride we feel in their achievement is enormous,” Mayor Jamieson said.

“Our congratulations and thanks go to everyone involved in making this first year of the Lightning such a success.