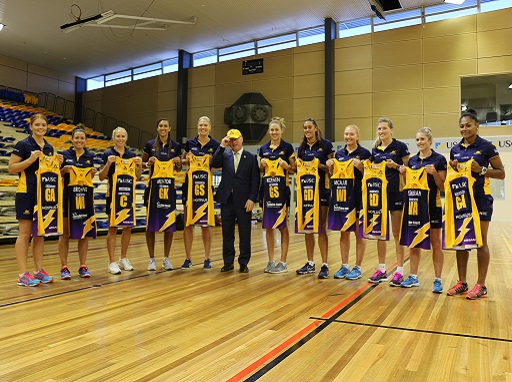 Mayor Mark Jamieson’s advocacy for the Sunshine Coast region to establish an elite netball team was a driving force in Lightning becoming a reality, and the Club is delighted to announce the Mayor has been chosen as its number one ticket holder for the 2017 season.
Lightning CEO, Danielle Smith said Cr Jamieson’s positive impact on the community was instrumental in the second-term Mayor securing the coveted role this year.
“The Mayor is the ultimate ambassador for this Club and thoroughly deserves this recognition,” Smith said.
“His devotion to this community is unwavering and his enthusiasm for Lightning makes him the perfect candidate to be our inaugural number one ticket holder.
“Sunshine Coast Council’s support and passion for Lightning will help the Club be a success on and off the court.”
Mayor Jamieson said it was an honour to receive the number one ticketholder card on behalf of the citizens of the Sunshine Coast.
“In just a short period the Lightning have already become well loved by our Sunshine Coast community,” Mayor Jamieson said.