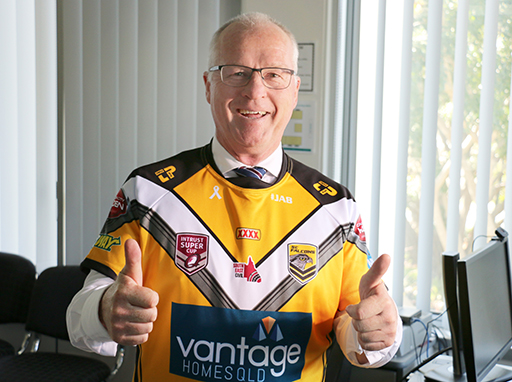 The Intrust Super Cup rugby league preliminary final on Sunday has some extra regional pride on the line thanks to a friendly wager between rival mayors.

Sunshine Coast Mayor Mark Jamieson has jumped behind his local team, the Sunshine Coast Falcons, in the bet with the Moreton Bay Acting Mayor Mike Charlton, who is backing the Redcliffe Dolphins in the showdown at Dolphin Oval on Sunday.

Mayor Jamieson and Cr Charlton have agreed to wear the opposing team’s jersey at their respective council’s next meeting if their local team loses.

Mayor Jamieson is the No.1 ticket holder of the Falcons and is looking forward to making the trip south into “enemy territory” and being in the crowd on Sunday.

“The Falcons had a wonderful season last year and they’ve backed it up again in 2017,” Mayor Jamieson said.

“My congratulations go to chairman Ashley Robinson, CEO Chris Flannery, coach Craig Ingebrigsten and their players and staff on making it through to the final three in what is a very strong competition.

“They continue to do us proud.

“I’m backing them to go two steps further and win the grand final against the Hunters.

“I’m sure Acting Mayor Charlton will look resplendent in the traditional black and gold of the Falcons.”

Not so sure about that is Cr Charlton who said he was quietly confident he wouldn’t be wearing the Sunshine Coast jersey come next Tuesday’s council meeting.

“The boys in red and white have come off a strong regular season, and I’m 100% certain skipper Sam Anderson and his troops will be busting their guts for a win knowing a premiership is just within arm’s reach,” Cr Charlton said.

“Under the guidance of coach Adam Mogg, the ‘Phins made it all the way to the premiership game last year, and with another 17 regular season wins under their belt, they definitely have the experience and hunger to go and win it all in 2017.”

Both teams met at the same stage of the competition last year, where the Dolphins advanced to the grand final with a 38-16 win over the Falcons.