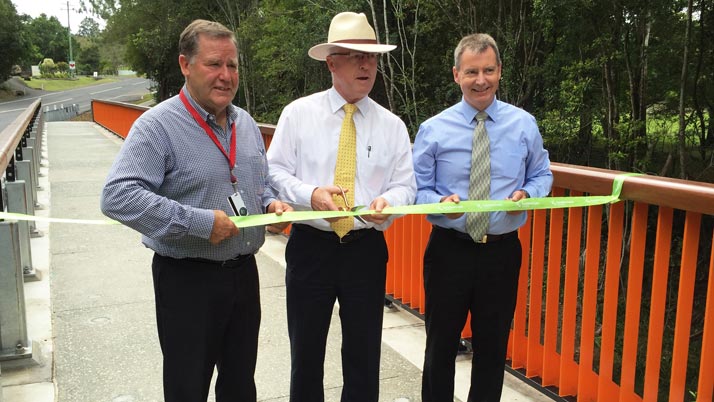 The final touches have been added to a new $1.9 million bridge in Eumundi, with Mayor Mark Jamieson joining local councillors and community representatives for the official opening today.

Mayor Mark Jamieson said the concrete bridge replaced a failing timber bridge and improved the safety of motorists and pedestrians.

“This new bridge, which has an estimated life span of 100 years, is almost 6m wider, with two 3.5m traffic lanes, 1.2m road shoulders and a 2m pedestrian walkway on the eastern side,” Mayor Jamieson said.

“When our old timber bridges reach a point where they can’t be maintained in a cost-effective way, it’s important we upgrade them to high quality concrete structures.

“This is major investment for Eumundi to improve a well-used travel route and safety, which I’m sure will be appreciated by the residents and the thousands of visitors to the town.”

Division 10 Councillor Greg Rogerson said council had worked closely with community representatives to include a feature balustrade and nearby shelter.

“The orange feature balustrade, designed in consultation with community representatives, are unique to Eumundi and add local character to the bridge,” Cr Rogerson said.

“Both the distinct orange colour and the shape of the balustrade represents the Scarlett Bracket fungi which is found in Eumundi – the way the railings overhand the bridge mimic the way fungus grows along a fallen tree in the bush.

“Council has also constructed a welcome statement nearby using recycled bridge timbers and a shelter to provide a rest area for people who walk along Eumundi Range Road.”