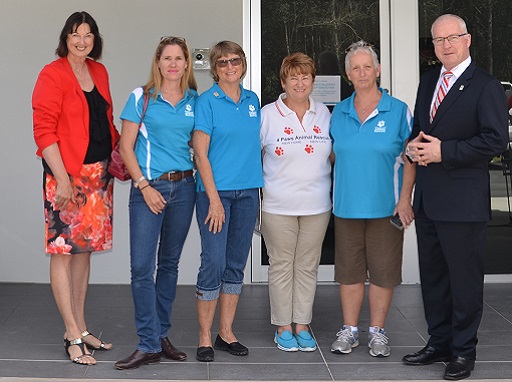 Lost pets and livestock on the Sunshine Coast are now being cared for at a new facility with council’s new Sippy Creek Animal Pound in Sippy Creek Road, Tanawha, officially open.
Construction commenced in January last year on the state-of-the-art facility which features a cattery building with 32 individual cat enclosures, a kennel building with 32 individual kennel modules, an assessment facility, a large animal enclosure, a poultry enclosure and central administration and reception building.
Mayor Mark Jamieson said the new Sippy Creek Animal Pound would have the ability to service the region’s growing pet population and animal management needs now and into the future.
“The former pound has been servicing the Coast for more than 30 years and demand on the service has grown significantly over that time,” Mayor Jamieson said.
“We have a commitment to safely house lost or abandoned animals and the new pound will enable us to do so in a way that is aligned with contemporary animal welfare obligations and guidelines.”