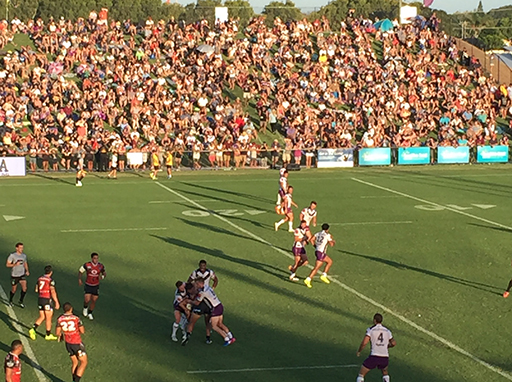 The new-look Sunshine Coast Stadium was given a resounding thumbs up after a record crowd watched the Melbourne Storm’s 30-18 win against the NZ Warriors in an NRL pre-season trial match on Saturday night.
The crowd of 10,169 footy fans easily surpassed the old record of 8119 set a decade ago as the stadium ushered in a new era for elite level sport on the Sunshine Coast.
A $2.5 million upgrade added spectator hills with superior vantage points on three sides of the ground, as well as an LED big screen, new car parking, better drainage and other improvements.
Mayor Mark Jamieson officially opened the upgrade of the stadium prior to the Storm-Warriors kick off.
“This is an important milestone in the history of sport on the Sunshine Coast,” Mayor Jamieson said.
“What a tremendous facility we now have here in our region to host and watch top-line sport and events.
“We can now offer great viewing spots for more than 10,000 patrons and we’ve had an overwhelmingly positive response from the fans and the clubs who took part in opening night.
“This expansion has been made possible through council’s $253 million capital works program for 2016/17 and the State Government’s Get Playing Plus program.
“We hope to see more improvements in the future as we look to bring more events like this to the Sunshine Coast.”