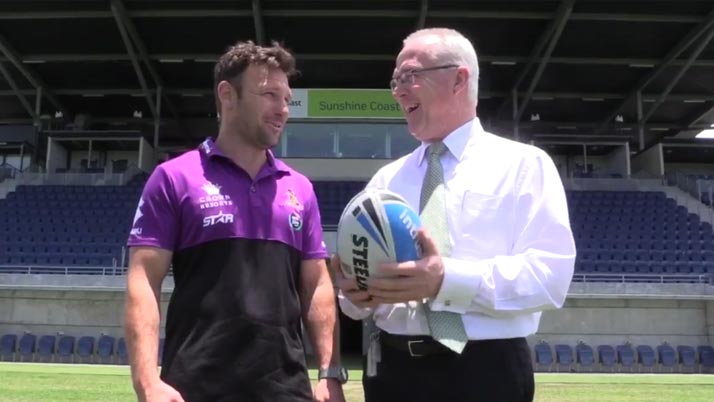 Melbourne Storm will bring the NRL back to the Sunshine Coast for the first time in seven years after locking in a pre-season trial game against Wests Tigers at Sunshine Coast Stadium on Saturday, February 13.

Details of the match were announced today by Sunshine Coast Mayor Mark Jamieson, who said bringing their “home” trial north was another indication of Melbourne’s growing commitment to the Coast.

Melbourne’s team is expected to feature many of the players who took Storm to the preliminary final stage in the recently completed NRL season, while it will be the first ever appearance on the Coast for the Tigers.

Kickoff will be at 5pm with Storm’s Intrust Super Cup feeder teams – Sunshine Coast Falcons and Easts – and its Coast-based NYC under-20s squad to play in curtain-raiser matches from 2.30pm.

“The Sunshine Coast is truly becoming Storm’s home away from home and we can’t wait to see Craig Bellamy’s team here in action in front of their growing Coast membership and supporter base in February,” Mayor Jamieson said.

“We’ll also make Jason Taylor and his Tigers feel very welcome as they step up their preparations for the new season.