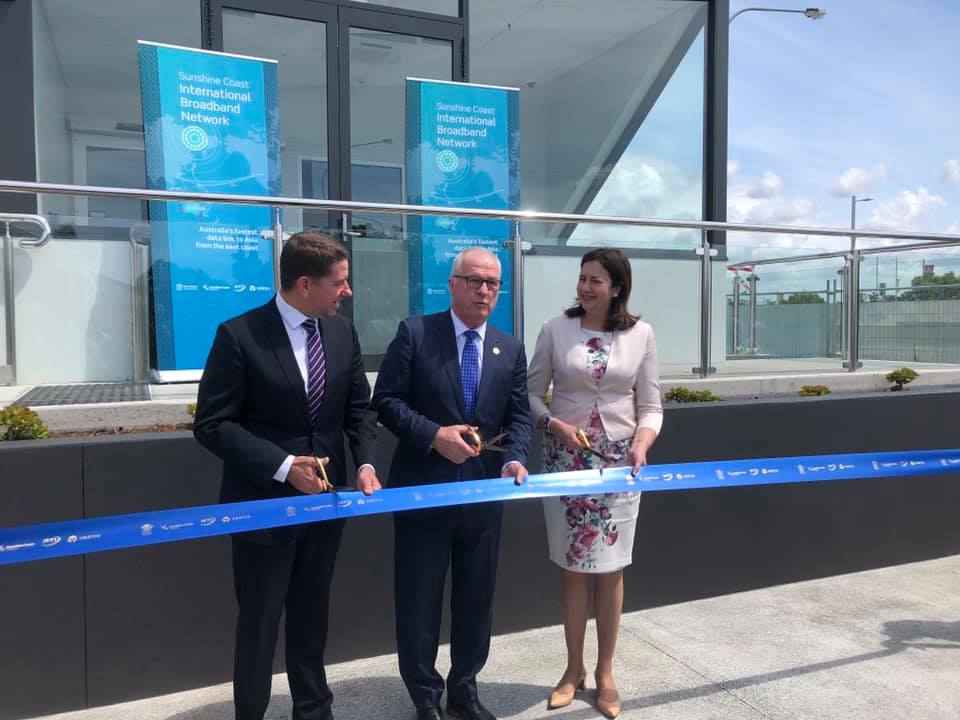 Tonight I joined with many others to acknowledge the 70th anniversary of the People’s Republic of China.

The Chinese Choir singing the respective anthems was magnificent.

Providing Queensland’s first direct international data and telecommunications connection to global markets is another step closer with the completion of the cable landing station at Maroochydore.
The cable landing station will house the connection point for the international submarine cable with landside communication networks and is a vital piece of infrastructure in a project that will deliver much needed diversity for Australia’s international communication needs as well significant economic benefits for the Sunshine Coast and Queensland.
Sunshine Coast Mayor Mark Jamieson was joined by Premier Annastacia Palaszczuk and Minister for State Development, Manufacturing, Infrastructure and Planning Cameron Dick today (26 September 2019) to mark the completion of this $7.2 million facility.
Mayor Mark Jamieson said the completion of the cable landing station marked another milestone in the delivery of the Sunshine Coast international broadband network.
“Unlike traditional cable landing stations that are normally non-descript buildings out of view from the general public, our landing station is designed to reflect Council’s design vision for the Maroochydore city centre,” Mayor Jamieson said.
“Our Sunshine Coast will offer the fastest data and telecommunications transmission from the eastern seaboard of Australia to Asia once the submarine cable comes ashore and is in service next year.
“It will help to position our region to become Australia’s first Digital Trade Hub – taking a region-wide approach to data and digital connectivity which will benefit a wide cross section of businesses and industries.
“Projects such as the Sunshine Coast International Broadband Network enable our region, its economy and our community to be well-positioned to respond to the rapidly evolving demands of the 21st century.
“When completed, this network will provide direct international data and telecommunications from the Sunshine Coast – the only location in Australia outside of Sydney and Perth to provide this direct international connectivity.
“This will afford a significant step-change to the Sunshine Coast’s attractiveness as an investment location.
“As the first local government in Australia to secure an investment in an international submarine cable, our council is yet again at the forefront of thinking outside the square, securing new revenue sources and pursuing opportunities to generate economic and employment growth as a major dividend for our residents, thus ensuring we continue to be Australia’s healthy, smart, creative region.”
The landing station is part of the Sunshine Coast International Broadband Cable Network being delivered thanks to $15 million from the Queensland Government’s $175 million Jobs and Regional Growth Fund and $20 million from Sunshine Coast Council.
Almost 865 jobs are a step closer as the landing-station for the $35 million Sunshine Coast International Broadband Network is completed.
Premier Annastacia Palaszczuk said the project is facilitating the direct landing of a new undersea internet data cable at Maroochydore on the Sunshine Coast and will generate almost $1 billion for the state economy.
“This $7.2 million cable landing station is the gateway to better internet connectivity for Queensland businesses,” the Premier said.
“Better connectivity means faster processing times for bigger data and more jobs.
“The cable will be able to provide Australia’s fastest data and telecommunications transmission speeds to Asia and the second fastest to the USA.
“It pitches Queensland firms to the forefront of the digital economy and will be a major drawcard for businesses and investment.
“We announced $15 million in funding to support this project in 2017 and we are now seeing the benefits.
“This is an investment that plans for the future and opens the opportunity for the jobs of the future here on the Sunshine Coast.”
Minister for State Development Cameron Dick said the Palaszczuk Government was pleased to partner with Sunshine Coast Council to deliver this transformative project for the region and the state.
“Our data needs will only increase as we continue to attract new investment to Queensland and further diversify our economy,” Mr Dick said.
“Landing this international broadband cable directly on the shores of the Sunshine Coast will ensure we’re able to maximise every opportunity the digital era presents for our state.”
Robert Linsdell, Managing Director of Vertiv (Australia and New Zealand) said through the development of the cable landing station, Sunshine Coast Council is taking a huge step towards future-proofing the region’s digital future.
“The importance of investing in the right internet infrastructure cannot be overstated, particularly as we enter a new era of IoT and smart cities, where reliable connectivity will be paramount to all aspects of our daily lives,” Mr Linsdell said.
The international broadband network is exactly the kind of infrastructure needed to continue that growth, enable increased connectivity and enhance the Sunshine Coast’s and Queensland’s position as a leading technology and business hub.
“Having a vision for these new technologies is one thing, but council is going further by making this important investment and bringing its vision to reality.”
The Sunshine Coast is renowned for its innovative region-making projects including:
· The Sunshine Coast Solar Farm – which has enabled the Sunshine Coast Council to become the first government in mainland Australia to offset 100% of its electricity usage through renewable energy
· The Sunshine Coast Airport Expansion Project – which includes delivery of a new longer, wider runway which will enable direct access to new markets in Asia, the Pacific and other locations in Australia when the runway is completed and in service in 2020
· Maroochydore City Centre – Australia’s only greenfield CBD and the nation’s truly smart city with technology and digital infrastructure solutions built in from the ground up
· The Automated Waste Collection System at the Maroochydore City Centre – Australia’s first CBD-wide underground automated waste collection system
· Establishing Australia’s first tripartite blue carbon initiative which will provide new opportunities and a sustainable future to our Blue Heart – over 5000 hectares of largely agricultural land in the Maroochy River Catchment.

Fast facts:
· Sunshine Coast Council is facilitating the landing of a new international submarine cable to Maroochydore by mid-2020.
· The project includes the installation of a 550km undersea fibre optic cable which will connect the Sunshine Coast to the 9700km Japan-Guam-Australia (JGA) submarine cable.
· The cable, which is laid on or buried under the sea floor, will connect to the cable landing station adjacent to the new Maroochydore City Centre.
· The cable landing station has the capacity to cater for four submarine cables and houses 24 data cabinets.
· Security is a key consideration and the building has 20 cameras.
· The cable landing station has electricity supplied from 2 different sources to reduce the risk of power outages and two 500 KVA generators as a backup power supply.
· The Sunshine Coast International Broadband Network project will help stimulate local business, generate new investment, and improve telecommunications diversity to Australia’s east coast.
· The cable will help to future proof the Sunshine Coast’s telecommunications capacity and increase our region’s smart city capability by ensuring access to important data networks.
· The Sunshine Coast International Broadband Submarine Cable Project is forecast to deliver up to 864 new jobs and stimulate $927 million in new investment in Queensland.