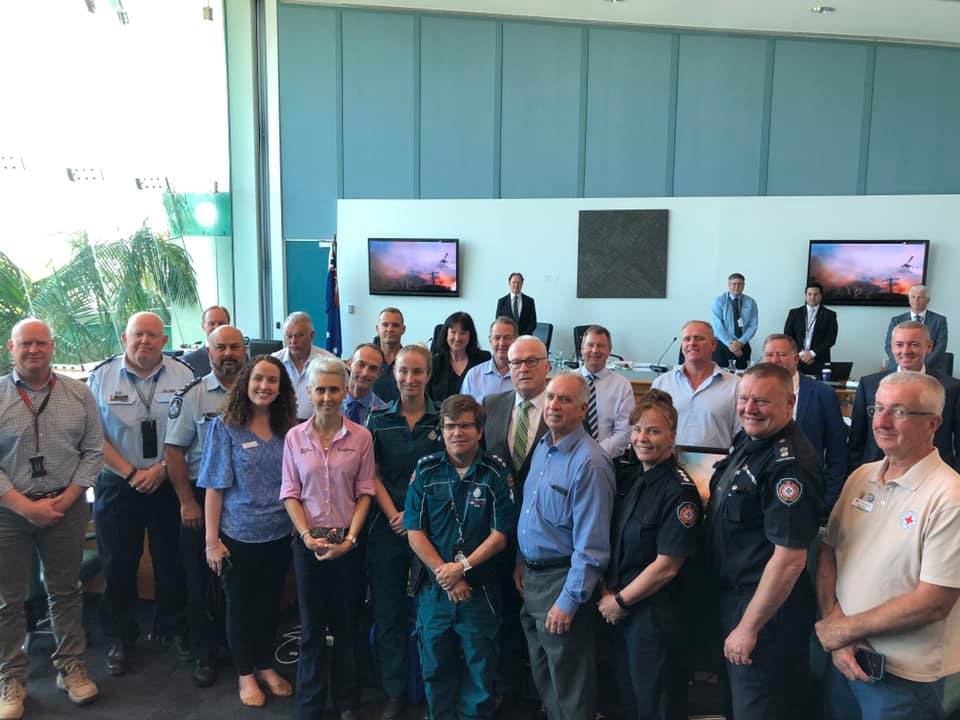 “On behalf of our Council, I would like to publicly acknowledge and thank everyone involved in managing the Sunshine Coast bushfire emergency last week,” Mayor Jamieson said.

“From the Queensland Fire and Emergency Services staff at the forefront of the fire, to the police, ambulance and other community service providers and our own council staff who worked around the clock in our Disaster Coordination Centre, or at the evacuation centre or helping others in the affected communities.
“Your dedication and bravery during this fast-burning bush fire is significant and you can be assured that you and your efforts are fulsomely appreciated by our council and the 320,000 residents we represent.

“The Local Disaster Coordination Centre was activated at 4.45pm on Monday September 9 and was at full stand up for the next three days. More than 70 Council staff and emergency agency liaisons worked a 24-hour roster to ensure our community was safe.

“At the height of the event, QFES had more than 100 appliances onsite, helicopter bombers and a 737 Aircraft brought up from New South Wales.

“Hundreds of residents were evacuated from their homes, and were staying with friends and family or in the evacuation centres for the following two nights until they were able to return home.

“The most fortunate element of this event is that there was no loss of life. Thankfully, our community members were safe and unharmed.”

Mayor Jamieson said recovery efforts were ongoing within the Peregian and Weyba areas, with residents extremely thankful to all involved in the response and recovery effort.

“This event could have been far worse, considering the speed and ferocity of the fire and the dangers involved in the immediate evacuation of hundreds of people within this location,” Mayor Jamieson said.

“I also want to acknowledge the Deputy Mayor, Cr Tim Dwyer, who chaired the Local Disaster Management Group in my absence, kept the community informed, visited the affected areas and oversaw our council’s emergency management response.

“Matters were well and truly in safe hands with Cr Dwyer and I want to publicly acknowledge and thank him for his efforts.

“We also need to remember that our region is not out of the woods when it comes to bush fire risk, with the weather forecast for the coming weeks and the local fire ban remaining in place for the Sunshine Coast through to midnight on October 4, 2019.

“Our residents are encouraged to remain ever-vigilant and disaster ready, and most definitely, not engage in lighting fires, given the risk this represents to our communities.”

· On Monday afternoon at 4.45pm on 9 September, the Disaster Management Team were notified by QFES that there was a fast-moving bush fire in the Peregian area that a number of fire units were currently being deployed to.

· Within 20 minutes of this notification, an Emergency Alert message was issued to the Peregian residents from the State Coordination Centre to prepare to leave, and Sunshine Coast Council was setting up evacuation centres in Nambour and Maroochydore for residents to seek refuge.

· At 5.30pm the Sunshine Coast LDMG was activated to STAND UP status to assist in the coordination of the event.

· The Local Disaster Coordination Centre was activated at this time and was at full stand up for the following three days with over 70 Council staff and emergency agency liaisons.