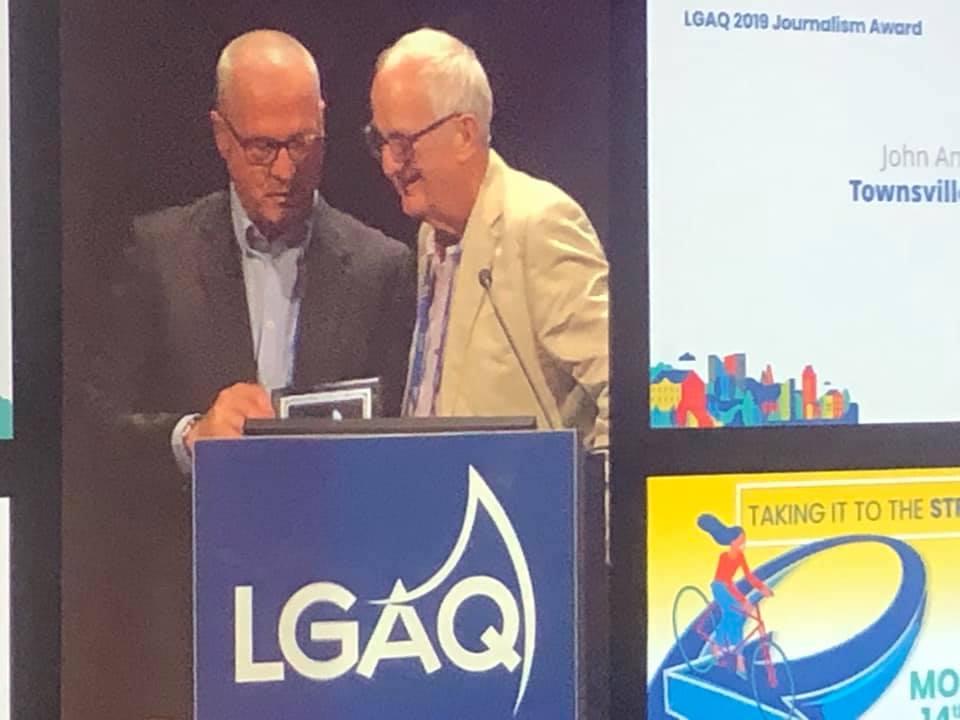 Veteran journalist John Andersen wins regional media prize
A series of stories on the monsoon floods that devastated north west Queensland in February and March this year has won veteran journalist John Andersen the 2019 LGAQ Bean Lockyer Ticehurst award for excellence in regional journalism.
The reports, which ran in the Townsville Bulletin, told a searing story of the economic and personal impacts of the huge loss of stock caused by the flooding.
Andersen’s entry stood out among a big field of quality contenders for the award, most of them covering the effects of the flooding in the north west, probably the most important story in regional Queensland this year.
Local Government Association of Queensland President, Sunshine Coast Mayor Mark Jamieson, said Andersen used his decades of reporting experience and fine grasp of story-telling to recount a harrowing but important episode in the state’s history.
“There are few journalists who have the range or depth of contacts that John has built up over the years and it showed with these stories,” he said.
“John was one of the first reporters into the main scene of the disaster, which eventually killed an estimated 500,000 stock and destroyed infrastructure over an area twice the size of Victoria.”
“He immediately understood the gravity of such an immense loss of cattle, what it would mean for the region and how devastating the floods would be for the personal lives of those primary producers in the front line.”
John Andersen was on hand to receive the award, which was announced tonight at the LGAQ’s annual conference in Cairns.
The award, which comes with a $15,000 prize, commemorates the work of John Bean, Paul Lockyer and Gary Ticehurst, a deeply respected media crew who died in tragic circumstances in 2011.
Regional leaders especially felt their loss because of the contribution their work made to ensuring rural and regional Queenslanders were given a voice and recognised for their contribution to public life.
The LGAQ issues an award for excellence in regional journalism to encourage other journalists to adopt the doggedness and professionalism that Bean, Lockyer and Ticehurst showed in pursuing their craft.

Speaking at Queensland Cricket Club at a QSports sponsor’s function. I touched on topic’s like the $1B* invested by LGAQ Council’s in QLD sport...

The Local Government Association of Queensland (LGAQ) Policy Executive met on Thursday Island Torres Strait to demonstrate our commitment to our...

‪Great to engage with attendees at the LGAQ Bush Councils Convention in Roma. The efforts of Local Councillors are noted and appreciated. Their...