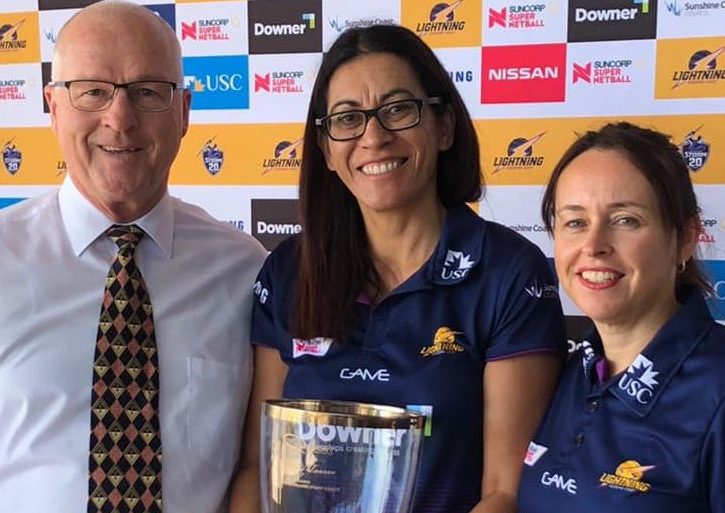 Sunshine Coast Mayor Mark Jamieson has recognised Sunshine Coast Lightning Head Coach Noeline Taurua for an outstanding job in the wake of today’s announcement that she will leave the club at the end of this season.

Ms Taurua, who has steered the Lightning to consecutive Suncorp Super Netball titles in the club’s first two seasons and top spot on the ladder in this year’s competition, today called time on her tenure as Head Coach.

At the same time, the club announced that current Assistant Coach Kylee Byrne will take over the reins as Lightning Head Coach next season.

“I have today spoken to Noeline and thanked her on behalf of the entire Sunshine Coast community for what she has achieved in her three years as the inaugural Head Coach of our outstanding Sunshine Coast Lightning,” Mayor Jamieson said.

“Noeline has carved out, and will retain, a special place in the history of our Sunshine Coast – not only as the inaugural Head Coach of our first ever national sporting team but also for what she has done to ensure the Sunshine Coast Lightning achieved unparalleled success in their first three years.

“Noeline has shown that with sheer determination, an uncanny sense of being able to achieve the best from her team and an abundance of good humour and humility, that it is possible to reach the pinnacle of her profession.

“Noeline is also the first to acknowledge that the Lightning’s success is the product of a team effort – and they are indeed an amazing team, from the players, to the coaching staff to the administration.

“I am therefore delighted at the news that Kylee Byrne will move up into the Head Coach role.

“Kylee has also shown great prowess in motivating and guiding the team and I am sure she will manage the transition seamlessly, ensuring the Lightning continues to be the force to be reckoned with in the Suncorp Super Netball Series.

“The Sunshine Coast Lightning have become exceptional role models and ambassadors for our community, with both Noeline and Kylee playing a big role in this regard.

“While Noeline leaves big shoes to fill when she departs at the end of the finals series, I have no doubt the Sunshine Coast Lightning will continue to go from strength to strength under Kylee’s coaching leadership.

“The dedication that both women have shown to building the foundations of what is arguably, Australia’s most successful start-up national league team ever, is something that is truly inspirational.

Limited tickets remain for this Saturday night’s final round home game against the Adelaide Thunderbirds at USC Stadium. A victory for the Lightning will secure top spot on the Suncorp Super Netball ladder and a home semi-final.

Ms Taurua will be honoured by the club and what will no doubt be a packed house at this Saturday night’s game.