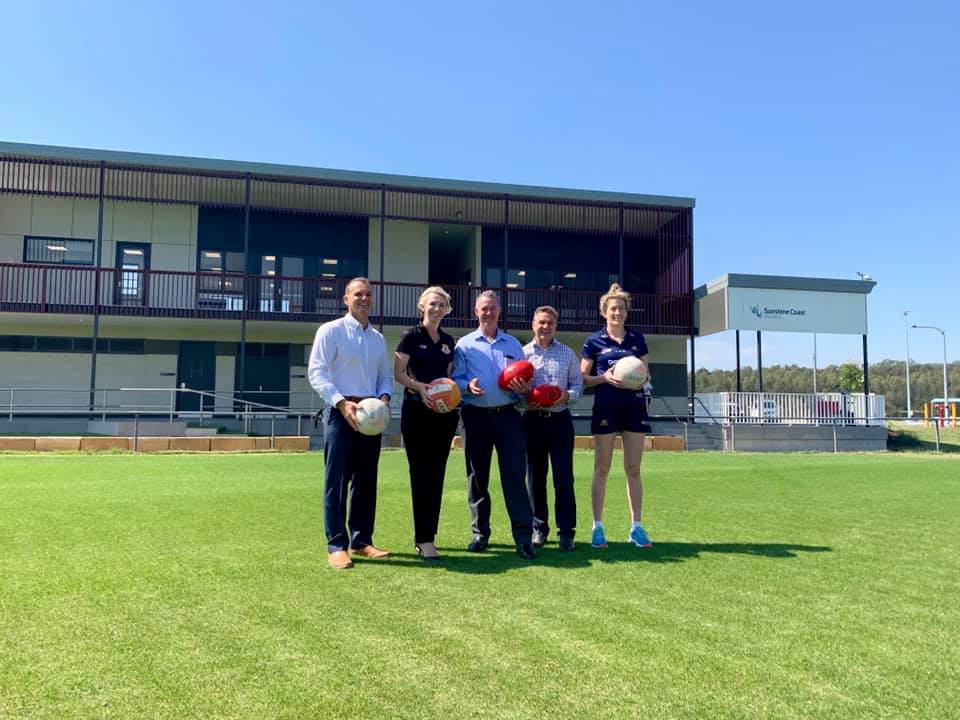 Scoring goals at Maroochydore Multi Sports Complex
Sunshine Coast AFL and netball players are the big winners with state-of-the-art new facilities to enjoy, after a $3.1 million upgrade to the Maroochydore Multi Sports Complex.
The recently completed new AFL facility includes a new two-level building consisting of two unisex change rooms and amenities, first aid and medical rooms, unisex umpire change room and amenities, public amenities, and administration offices.
The existing netball building has also received an upgrade, with an upper level added for training and administration. In addition, a former store room has been converted to a parent’s room featuring a baby change table and microwave.
Sunshine Coast Mayor Mark Jamieson said the complex provides outstanding opportunities to encourage active, healthy lifestyles and this upgrade reflects council’s strong commitment to investing in high quality sporting facilities for the region.
“Our Sunshine Coast Council is committed to providing quality sport and recreation facilities that encourage our residents – particularly our children and young people – to get active, as well as enjoy the social and other benefits that arise from participating in sport,” Mayor Jamieson said.
Division 7 Councillor Ted Hungerford said the project would help meet current and future demands for AFL and netball facilities.
“Upgrading these facilities not only provides an additional incentive for elite teams to visit, but also makes it easier for local families and children to get involved in sport,” Cr Hungerford said.
“Not only does it provide fantastic health and social benefits, but we understand that sport and recreation contributes approximately $442 million per year to the local economy.
“Sports related tourism is one of the key drivers of the region’s economy and investing in the Maroochydore Multi Sports Complex helps attract a higher number of top calibre events.”
The complex has 26 netball courts and is well positioned to host regional, state and national competitions.
Five AFL teams held their pre-season training at the facility and from October 18 it will host the AFL Queensland Schools Cup State Finals
AFL Queensland Sunshine Coast Regional Manager Paul Tresise said his organisation was proud and excited to partner with Sunshine Coast Council.
“These advancements in facilities will allow the game to continue to reach out to more participants, whilst furthering the quality delivery of our regional talent and academy programs,” Mr Tresise said.
“It will also act as a much improved training facility for our local umpires.
“We look forward to a long and strong future at this venue, growing and developing the game of AFL for even more people to enjoy.”
Sunshine Coast Netball Association President Tanya Elms said the brand new facilities would provide a boost to the thousands of players who utilise the complex.
“We are so grateful for this joint venture which will help us grow and evolve netball on the coast,” Ms Elms said.
“I am delighted with what’s been accomplished and with NetFest about to return to the region these upgrades could not have come at a better time.”
The Maroochydore Multi Sports Complex upgrade is funded with $2.55 million from council’s $320 million Capital Works Program, with a funding contribution of $300,000 from Sunshine Coast Netball Association.
$250,000 in funds from the AFL’s $450,000 contribution to various projects in partnership with council were also utilised.
As part of the recent upgrades four turf courts have been converted to hard courts and these improvements played a major role in securing NetFest, which is being held on the Sunshine Coast for the second time from October 10-13.
The Netball Queensland Primary Schools Cup were held last month and will come to the Sunshine Coast again in 2021, plus the State Age Carnival which will attract more than 7,000 players and spectators next year.