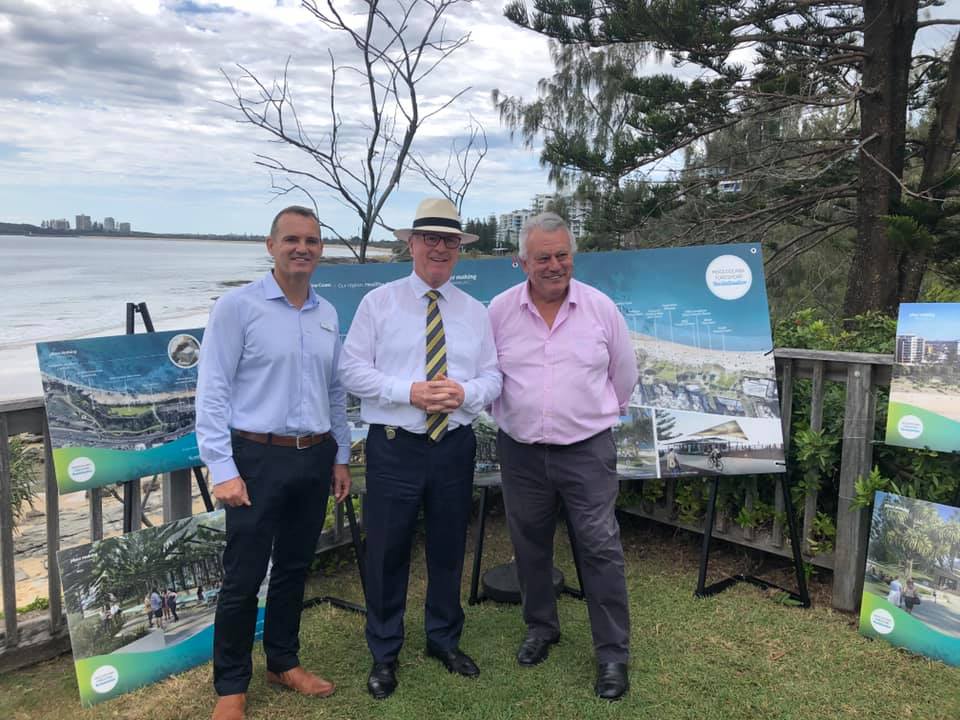 Mooloolaba’s natural beauty and relaxed lifestyle have been reflected in the detailed design for the Mooloolaba foreshore, which was released by Sunshine Coast Council today.
The detailed design has been released ahead of the first stage of works starting in 2020.
The detailed design seeks to deliver an increase in the public beachfront parkland by 40 per cent, add extensive waterfront pathways and provide enhanced spaces and amenities over a number of years, as funding becomes available.
Sunshine Coast Council Mayor Mark Jamieson said the Mooloolaba Foreshore Revitalisation project would benefit locals, businesses and tourists alike.
The Placemaking Mooloolaba Master Plan was formally adopted by council in December 2015, following an extensive community engagement process.
Community members wanting more information about the Mooloolaba Foreshore Revitalisation can visit council’s websitewww.sunshinecoast.qld.gov.au or visit the project team at a pop-up stall on The Esplanade on Saturday, August 31, between 8am-11am.
Mooloolaba Foreshore Revitalisation design inspiration
The smooth flowing forms of the crescent-shaped beach and winding headline which are reflected in the flowing forms of the foreshore parkland.
The foaming waves and watermark on the beach influence form and patterning of the pavements.
The signature Sunshine Coast foreshore species of Casuarina, Banksia and Pandanus provide striking leaf forms, shadows, fruit, flowers and nuts that influence the design and detailing of elements such as custom playgrounds, water play areas and art.
This project is one of many Mooloolaba infrastructure projects which council, the State and Federal Governments are investing in to create a world-class destination for residents and visitors to enjoy, including:
the $3.5 million Mooloolaba Beach Holiday Park redevelopment
the $2 million Mooloolaba boardwalk replacement
the $18 million Brisbane Road car park redevelopment
the $5.15 million Mayes Canal pedestrian and cycling bridge co-funded by council and the
Queensland Government
the $12 million Mayes Canal to Venning St corridor upgrade contribution from the Federal
Government, and the Mooloolaba Transport Corridor upgrade.