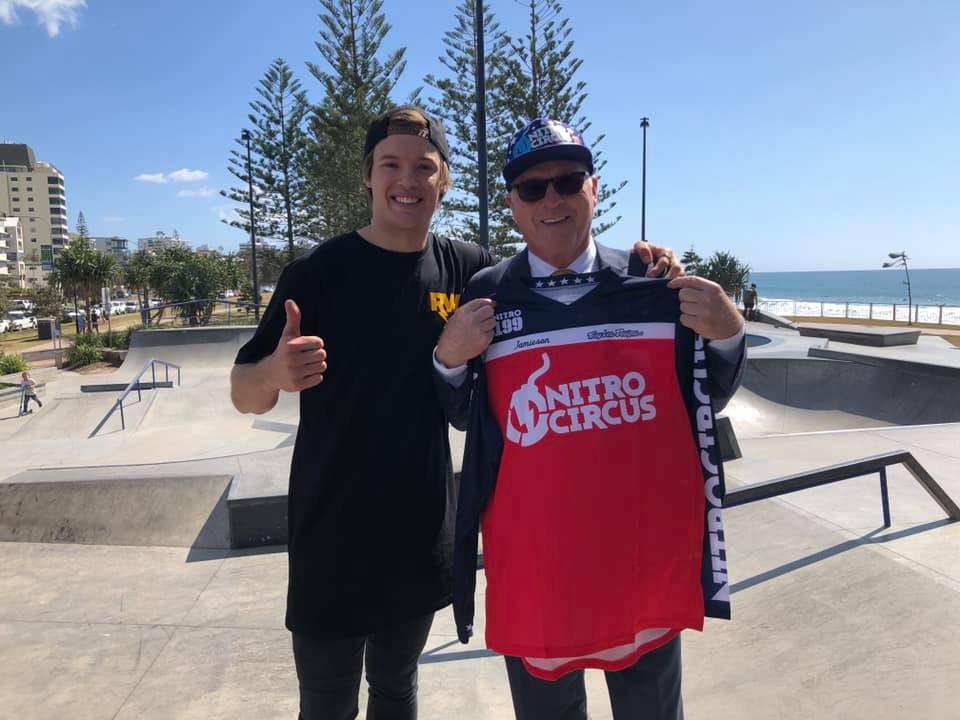 Global sports entertainment leader Nitro Circus will return to the Sunshine Coast for the first time in three years next fall with their latest world tour, You Got This. Coming to Sunshine Coast Stadium on Sunday, March 29, 2020, You Got This features a cast of top tier international athletes and
thrill-loving daredevils, including one of the Sunshine Coast’s own: (scooter and BMX sensation Ryan Williams.

Coming off an historic X Games triumph last month after winning BMX Big Air gold three consecutive times in Sydney, Shanghai and Minneapolis – the first athlete to achieve such a three-peat – Williams now cannot wait to throw down in front of his home crowd.

“The past 12 months for me have been absolutely amazing. I still can’t believe everything that has happened. But without a doubt there is something special about riding in front of your hometown,” Williams explained. “From school teachers and everyone at my local skate park, to my parents and friends, so many people have supported me on this incredible journey and helped me get to where I am today. There’s so many emotions. I just can’t wait to get back on the ramp and put on a big show and show what we can do!”

Nitro Circus, which over the past decade has produced more than 380 shows across 37 countries, is currently in the middle of a two-year stadium trek for You Got This. Next March, South Queensland will get to see it all with their own eyes, when the best action sports athletes on the planet descend on Sunshine Coast Stadium.

With no roof there are no limits. The huge stage set for You Got This features the legendary Giganta ramp that launches athletes five stories into the air. On the moto side, Nitro Circus’ elite FMX athletes will perform highly choreographed tricks, including many you won’t see anywhere else. The production team is also cooking up some crazy new contraptions to launch through the sky.

“For us, Sunshine Coast has always been a strong and loyal market, with a great knowledge of action sports. As we mapped out the tour, it came down to either Gold Coast or Sunshine Coast for the South Queensland date. Now, on the back of Council support plus R Willy’s determined campaigning, we are thrilled to be back,” said Nitro Circus CEO Andy Edwards.

Tickets to Nitro Circus: You Got This at Sunshine Coast Stadium go on sale Monday, October 14 at NitroCircus.com.

Not just content with bringing their latest world spectacle to his hometown, Williams and the Nitro Circus crew have secured a second major event for the Coast: Hot Wheels Superchargers is coming to Alexandria Skate Park on October 13 and 14, 2019.

For Superchargers, Nitro Circus is teaming up with the number-one selling toy in the world, Hot Wheels, to offer a platform for young athletes to showcase their talent and receive mentorship from some of the best athletes in the industry. The event is open to athletes 16 years old and under across Skate, BMX, and Scooter. The program debuted earlier this year in Southern California but now is set to expand globally.

This October, Ryan Williams along with several of Nitro Circus’ top athletes will be at Alexandria Skate Park to provide invaluable feedback to young Sunshine Coast athletes and help them hone their skills. It’s free to sign up — registration opens on Tuesday, September 10.