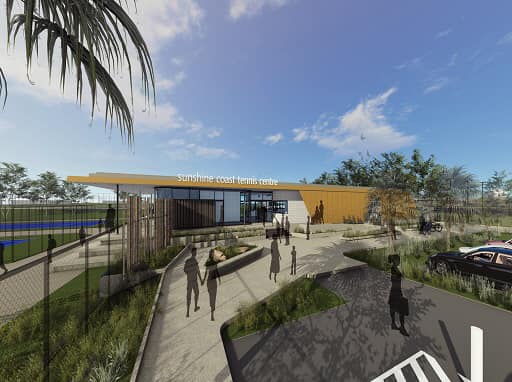 The Sunshine Coast Tennis Centre in Caloundra is set to become the region’s premier tennis facility with a multi-million dollar upgrade on target for completion by the end of the year.
The second stage of a $5.6 million upgrade to the centre started in February. Stage 2, costing $3.5 million, includes a new clubhouse and follows a $2.1 million upgrade in 2015.
Mayor Mark Jamieson said the upgrade built on council’s plans to provide a great facility for locals wishing to have a hit of tennis, as well as a platform for those who are pursuing a pathway to elite competition.
“Our council is already attracting national sporting championships and premier games in other sports and this major upgrade will enable us to draw large scale tennis events and training opportunities,” Mayor Jamieson said.
Deputy Mayor and Division 2 Councillor Tim Dwyer said the completed project would deliver a council-wide tennis facility for the Sunshine Coast.
“It will provide an excellent training facility for local players of all ages and offers an opportunity for player development programs to be based on the Sunshine Coast,” Cr Dwyer said.
“The project is making great progress with works on the new clubhouse expected to be completed in mid-September and a new car park completed by the end of September.
“Patrons have outgrown the current facilities and the new Centre will be a welcome upgrade for all users. It includes a retail space, café and community kitchens, and a community meeting space, tournament and first aid rooms.”
The first stage in 2015 saw the rebuild of nine Plexipave courts, including one show-court.
Stage 3 of this project, pending funding availability from State and Federal governments, will deliver further court upgrades and landscaping works.