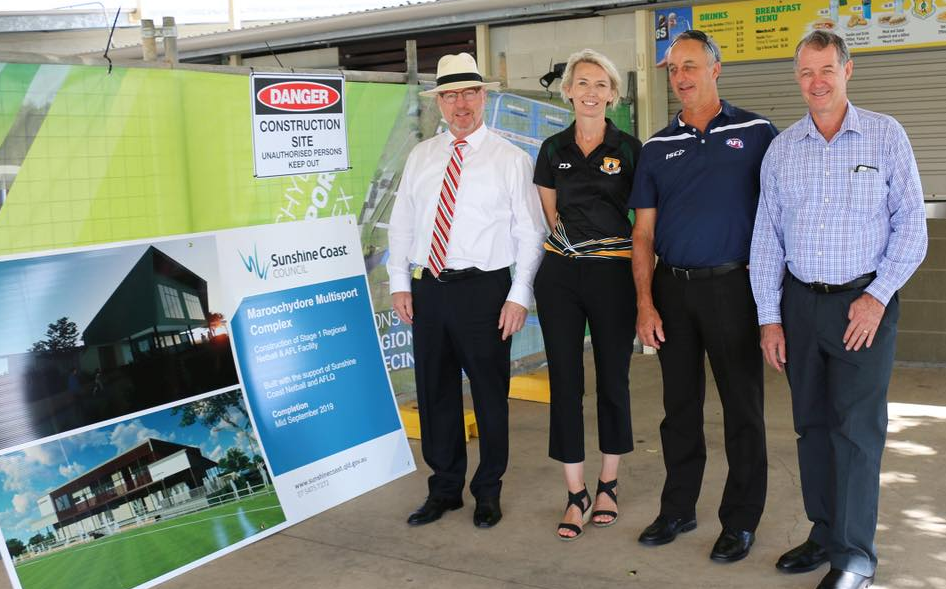 The latest stage in the Maroochydore Multi Sports Complex upgrade – a $2.8 million project that will include a new clubhouse with AFL and netball player facilities – starts this month and is expected to open in September this year.

Following the recent addition of new netball courts, which increased the number of hard courts to 20, the complex has been well positioned to host regional, state and national competitions.

Mayor Mark Jamieson said the next stage of works would ensure the Sunshine Coast continues to attract elite level AFL, as well as providing outstanding local facilities for the community.

“With the outstanding success of our very own Sunshine Coast Lightning in the Suncorp Super Netball Series, we are seeing significant growth in participation numbers in netball, as well as growing interest in staging elite levels of competition in this sport here on the Sunshine Coast,” Mayor Jamieson said.

“In addition, we’re in the midst of hosting five AFL teams at Maroochydore Multi Sports Complex for their pre-season training, which shows the high regard in which our exceptional facilities are held.

“Alongside the multi-million dollar upgrade to Caloundra Tennis Centre which we announced on February 4, this project demonstrates council’s strong commitment to investing in high quality sporting facilities for our region.”

“Upgrading these facilities now not only provides an additional incentive for elite teams to visit, but also makes it easier for hundreds of local families get involved in AFL and netball each week during the seasons,” Cr Hungerford said.

“By providing new unisex change rooms and amenities, we also hope to increase participation in these sports.”

This project is funded through council’s $370 million Capital Works Program, with funding contributions from Sunshine Coast Netball and AFL.

Future stages – which would include an AFL coach’s box, additional unisex player facilities and development of an eastern multisport field – are already on the drawing board and will be subject to funding.