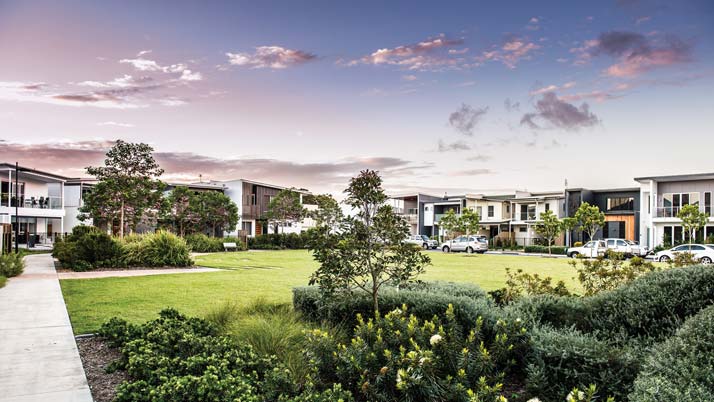 “This award-winning development near our new CBD is further evidence the Sunshine Coast is open for quality development business and the national recognition is very rewarding for everyone involved,” Mr Whittaker said.

“The award recognises the developer’s commitment to the project, council’s vision for the sustainable development of a diverse and growing area of the Sunshine Coast, and the efforts of council’s Major Planning Projects team who have assisted in delivering an affordable and integrated community.”

The Sunshine Cove development comprises a diverse mix of residential lots and is supported by a range of innovative commercial developments that frame the Maroochydore city centre.

“Our delivery of Sunshine Cove has been guided by the principles of sustainability, community, growth, amenity, innovation and affordability,” Mr Dickson said.

“Working closely with Sunshine Coast Council has enabled us to deliver a first-class development that uses innovative freehold design to truly meet the needs of the community.”

“Council identified the opportunity to install access a floating pontoon and pedestrian ramp for kayaks on Cornmeal Creek, Maroochydore, and working in partnership with Chardan has enabled this infrastructure to be delivered,” Ms Edwards said.

“Once construction is complete kayakers will be able to use the pontoon to further explore Cornmeal Creek and Sunshine Cove Lake.”

The development includes 35 hectares of lakes and parklands, and several kilometres of walking and cycling paths that connect this vibrant community to the wider Maroochydore area and city centre. Since opening in 2006, Maroochy Boulevard has provided a streamlined transport corridor that links to the CBD redevelopment as well as welcoming an emerging commercial precinct.

Sunshine Cove will be home to around 6000 residents, was one of the first to produce freehold terrace style allotments on the Sunshine Coast and is used as a benchmark by many other developers within south east Queensland.

Council’s major planning projects team will continue to work with the developers of Sunshine Cove to deliver an additional 500 to 700 new residential lots over the next five to seven years.