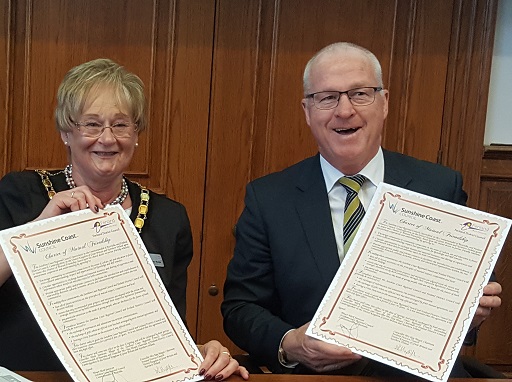 Although they are 16,500km apart, the relationship between the Sunshine Coast in Australia and Fenland in England continues to grow – all thanks to the bravery of a young pilot 73 years ago.

Mayor Mark Jamieson visited the Fenland District Council in Cambridgeshire to share the region’s healthy, smart, creative vision and reaffirm the Charter of Mutual Friendship between the Sunshine Coast and Fenland.

Mayor Jamieson said the charter was based on a shared desire to pursue friendly relations and promote cooperation and understanding between the two regions.

“We will be encouraging community connections in the areas of the economy, culture, art and education to foster cross-cultural understanding, respect and opportunities for knowledge and skills transfer,” Mayor Jamieson said.

“We will be consider opportunities to exchange information and to share experiences where there are beneficial outcomes for both communities.

“And we will facilitate the introduction and establishment of relationships between cultural, economic, artistic and educational organisations within our two communities.”

The link between the Sunshine Coast and Fenland began because of the personal sacrifice of a brave young Nambour man.

In the early hours of July 28, 1944, RAAF Pilot Officer Jim Hocking refused to leave his stricken aircraft and guided it away from the township of March to avoid the damage and loss of life its impact would have caused.

“Sadly, in doing so this left no time for him to evacuate the Short Stirling Bomber safely, and he lost his own life when the aircraft crashed in a nearby field,” Mayor Jamieson said.

“For security reasons, the young pilot’s story was not made public at the time and his heroism only came to light after an investigation by the Cambridgeshire Times in the 1980s.”