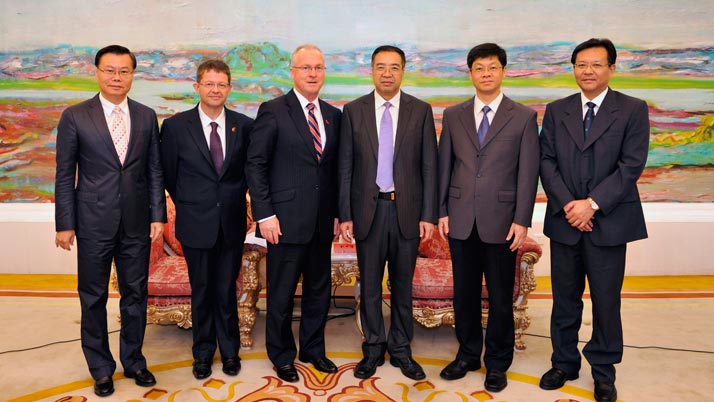 Mayor Mark Jamieson and Cr Jenny McKay have paid their respects to one of the Sunshine Coast’s biggest supporters in Asia who passed away on Thursday.

Mr Hong Chengzong was the Director-General of the Municipal Foreign Affairs Office in Xiamen, China, which has had a Friendship City agreement with the Sunshine Coast Council (and its predecessor council) since September 1999.

“I spent time with Hong on both trips I’ve made to Xiamen and he was a very gracious host, as well as being a strong believer in the value of maintaining and enhancing our sister city ties,” Mayor Jamieson said.

“Thanks to him, our council and many of our Coast businesses have seen great rewards from our partnership and we will certainly miss his unwavering support.

“Hong was a very keen student of Chinese history and proudly discussed it at any opportunity to ensure greater appreciation of China’s proud past and its place on the world stage.

“Our thoughts and prayers are with Hong’s family, friends and colleagues in Xiamen.”

Cr McKay, who has been recognised as an “honorary citizen” of Xiamen, recently led a small business delegation to the city to attend the China International Fair for Investment and Trade.

She also hosted a municipal government delegation from Xiamen that visited the Sunshine Coast in October to gain a greater understanding of the trade and investment opportunities of interest to the two regions.

“I’ve known Hong for more than a decade and have a great respect for him,” Cr McKay said.

“He was a great leader who saw the greater good in everyone.

“I fondly remember having dinner with him and he shared with me his aspirations for the young people of China and the importance of growing their relationship and connection with our young people here on the Sunshine Coast.

“He was a big supporter of our reciprocal youth exchanges and has been a key part of bi-lateral discussions on new opportunities that can be pursued by both Xiamen and the Sunshine Coast Council with the signing of the China – Australia Free Trade Agreement.

“He had a tremendous interest in our region and could see the enormous value that can be derived from a partnership like the one we have with Xiamen.

“He will certainly be missed.”

(Image note: Hong Chengzong is on the far left)