Home / All Posts / Economy / Sunshine Coast the sweet spot as the pavlova... 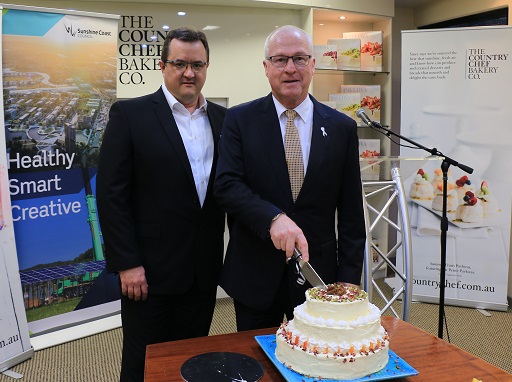 In a move that may reignite the great pavlova debate, Sunshine Coast-based Country Chef Bakery Co. may have taken the title of being the biggest pavlova producer in the Southern Hemisphere following the official opening of a new pavlova factory by Mayor Mark Jamieson today (November 22).
The family-owned company, which has been baking since 1952, used their first contract to support the development of their purpose-built facilities in Nambour in 1993 and a move to the current site in Kunda Park in 2002, and 15 years later have completed the new pavlova factory adjacent to their original site.
Mayor Mark Jamieson joined the Country Chef bakery team at their new Sunshine Coast pavlova factory at Kunda Park for the official opening.
Mayor Jamieson described Country Chef as a local 100% Australian-owned family business success story.
“Country Chef is growing from strength to strength,” Mayor Jamieson said.
“Their latest expansion is growing jobs for locals and has resulted in more than 49 new full-time staff while retaining their 70 current full-time employees.