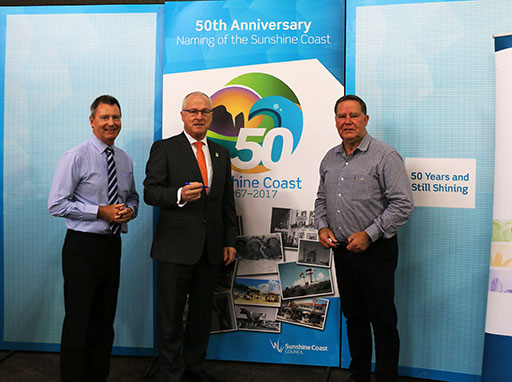 Sunshine Coast locals and visitors can secure a place in history by signing their names on a giant anniversary card in an attempt to break a Guinness World Record.
Unveiled today (December 5) by Mayor Mark Jamieson was an enormous card, 2.4 metres high by 3.6 metres wide, which will feature at the New Year’s Eve celebrations at Mooloolaba, marking the finale to the year-long 50th Anniversary of the Naming of the Sunshine Coast celebrations.
Every person who signs will take us one step closer to setting the world record for the most contributions to a greeting card.
Mayor Jamieson said the 50th anniversary year had been full of imaginative and engaging opportunities for Sunshine Coast residents and community groups.
“We have enjoyed a wonderful year of coming together to celebrate the people, places and events that have contributed to our Coast’s story,” Mayor Jamieson said.
“The giant anniversary card is another great opportunity for families, locals and visitors to come together, and wish the Sunshine Coast all the best for the future.
“We want to beat the record holders from England by aiming for 18,000 signatures.”